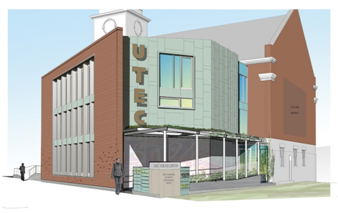 As a property located in a historic district, St. Paul's Church was eligible for Massachusetts State Historic Tax Credits based on qualifying rehabilitation expenditures. Dorfman Capital was hired to arrange the sale of the tax credits, with the proceeds of the sale being used to help fund the rehabilitation and expansion of the former church. As a tax exempt nonprofit organization, UTEC was still able to benefit from the tax credits by selling them to an investor.

UTEC originally purchased the church in 2006 to house its headquarters, with the intention of rehabilitating and expanding the historic property to provide additional services. Approximately 7,500 square feet of space was added to the building in a new three story addition. Services being offered in the new space include a community café, performance center, and classrooms for UTEC's alternative education and GED programs.