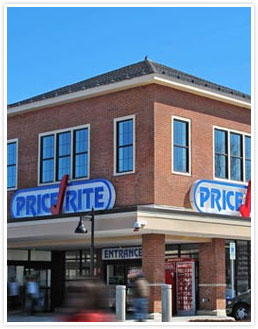 The Client: Finard Properties / The Shops at Riverwood

For five years, the former Bay State Paper Mill sat shuttered and rotting. Once the longest continuously operated paper mill in America, from 1773 until its closure in 2004, the 8.5-acre site along the banks of the Neponset River had become a blight on Boston’s Hyde Park neighborhood and a toxic menace to the river below. In 2009, however, ground was broken on a redevelopment project that would breathe new life into the site without erasing its history.

The old mill has become The Shops at Riverwood, a 106,000 s/f lifestyle center that opened in 2010 and is currently in phased development. Phase One of The Shops included a 36,431 s/f Price Rite Supermarket, the company’s first Boston area location, and a branch of local lender Sovereign Bank. Phase Two will include restaurants and traditional small retail. Various features of the site’s heritage have been kept, including the Tileston & Hollingsworth dam and waterfall and restored views of the river.

Todd Finard of Finard Properties, which developed the site, immediately saw its potential and remained undaunted despite the challenges that lay ahead. Poisoned by centuries of industrial use, the property required an extensive—and expensive—environmental cleansing. So he turned to Dorfman Capital in hopes of reducing project costs through tax credits offered by the Massachusetts Brownfields Tax Credit program.

Dorfman Capital was able to arrange $2M in tax credits to help offset the $8M total cost of site detoxification. “We knew very little about the tax credit program and relied heavily on Dorfman Capital,” explains Finard. “Bob guided us through the complicated application process and helped us maximize the benefits of this program.”

For his part, Dorfman Capital president Bob Dorfman views the The Shops at Riverwood as an ideal brownfields redevelopment project: “Not only has a vacant urban site been reused, activating the area and encouraging further economic development, but its reuse has contributed to the Neponset River Watershed Cleanup movement, improving quality of life for the 90,000 people living within a two-mile radius.”

"Putting together a project like ours is not always a fluid process. We found working with Bob very helpful because of his flexibility, consistency and quick response time. He delivered what he promised. We were pleasantly surprised how smoothly his part of the financing went.” Frank Mertes, Chief Financial Officer, Holyoke Health Center

Urban construction projects, like ours at the Lynn Community Health Center, often run into unexpected, budget-breaking environmental clean-up expenses. Thankfully, Massachusetts Brownfields Tax Credits can provide funds that cover a portion of these expenses. We were so pleased to take advantage of Dorfman Capital's expertise in accessing this important, but complicated, funding. It made a very positive difference in our ability to finance a new building for the Lynn Community Health Center! Lori Berry, Executive Director